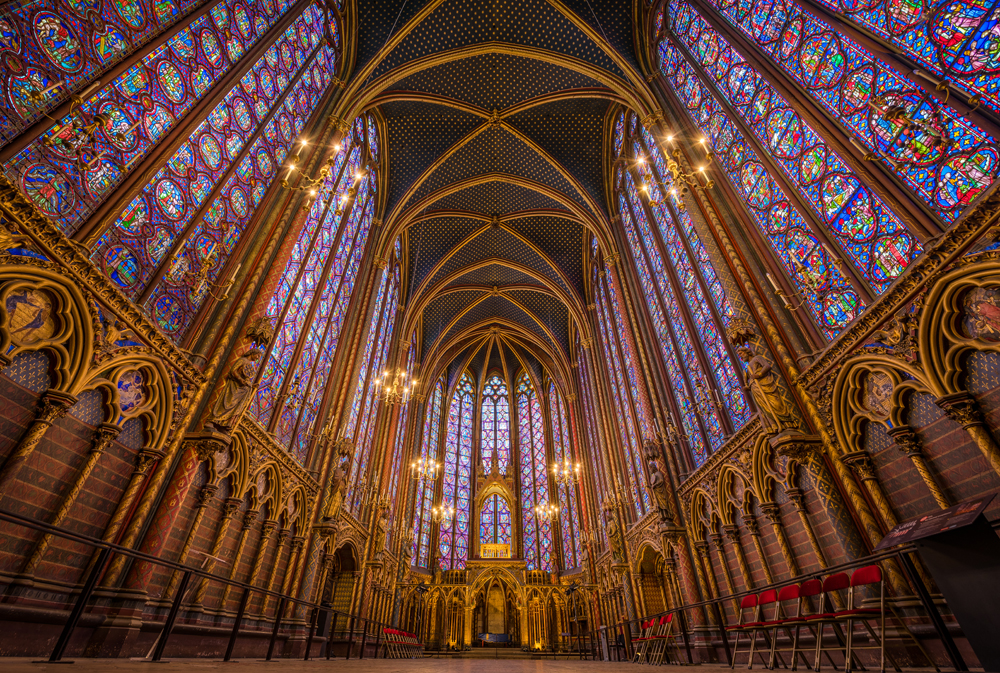 Though a picture of the Eiffel tower might be the first to pop into your head when you hear the word “France,” that idea is relatively new. Before the tower’s construction in 1887, people from around the world thought not of one massive metal structure, but of the more than 100 cathedrals scattered throughout the country, the most famous of which being of course the Notre-Dame cathedral in Paris.

The Notre-Dame is currently under construction from the fire a couple of years back, but there are still plenty of cathedrals still worth seeing in Paris if you make the trip. From stained glass to massive tombs, these are the five cathedrals you need to see in Paris.

The Sainte-Chappelle (or literally the Holy Chapel), is probably one of my favorite cathedrals to visit. It is located on the Île de la Cité, only a few hundred yards away from the Notre Dame, and because of this it is often overlooked. It is relatively unassuming from the outside, and is surrounded by much newer buildings that obscure the bottom portion of it to begin with. But the outside isn’t what makes this cathedral so gorgeous.

The inside of the church is one of the most brightly colored and absolutely stunning places on earth. The ceiling is painted dark blue like the night sky, with thousands of golden fleur-de-lis spotting it all over like stars. (The word ceiling comes from the French word for sky, “Ciel.”) Golden archways break up the portions of the blue ceiling, and that’s just the start.

When you make your way to the upper chamber, you are flooded immediately by the millions of colors that make up the stained-glass windows, which run from the top of the ceiling (about 18m up) all the way down to just about head-level. The windows are practically the only way light gets in the room, so instead of a regular yellow or blue light, the room is filled with an intense chroma that is unlike anything else. The stained glass tells the story of the bible in detail, likely to help oral tradition in a time when literacy was for the privileged.

The Sainte-Chapelle is probably the most colorful place in France, and is without a doubt one of the most unique cathedral experiences out there.

I’ve written about the Sacré-Coeur Basilica before, and with good reason. It’s perched on Montmartre, meaning that it rests with one of the best views of Paris there is. The cathedral is extremely young, having only been consecrated about a hundred years ago, meaning that it comes with some some interesting political background.

The cathedral came from the new French Third Republic, which was adopted in 1870, and the location was chosen because of the execution of the Archbishop of Paris on the mountain, who became a sort of martyr for the catholic church. Eventually, his successor reportedly had a vision on the top of the mountain, called it the mountain of the martyr, Montmartre, and said that the Sacré-Coeur should be built there.

It’s basically a big white castle on the hill. I’m not an architect, and architectural styles tend to be lost on me, but the rooftops of the Sacré-Coeur reminds me quite a lot of St. Basil’s cathedral in Moscow, without the color of course. Supposedly its distinctive white rooftops, combined with it sitting on top of the hill, was a useful tool for airplane pilots during the world wars.

And as if the beautiful view wasn’t enough, Montmartre is the home to tons of other cultural elements of Paris. The result is musicians and street performers frequenting the steps of the Sacré-Coeur, making the whole experience even more enjoyable. If the cathedral doesn’t exceed expectations, the area will.

(For more on Montmartre, check out my blog post all about it here!)

Okay, technically this is a church, not a cathedral (the difference, if you’re wondering, is that the leader of it is a priest and not a bishop), but it definitely is worth being on the list. Not only is the church impressive inside and out, but it’s well known outside of its architecture for the role it plays in The Da Vinci Code (both the book and the movie).

The church houses quite a bit of significant art, including some smaller sculptures by the sculptor Jean-Baptiste Pigalle. However, the main piece of interest in the Saint-Sulpice is the massive ornate organ that hangs over the entire chamber. Supposedly, with the only real exception being the addition of an electric blower in the early 20th century, the organ is maintained today in pretty much the same condition it was when it was made nearly 160 years ago.

The first time I went to the Saint-Sulpice a couple of years ago, it was just a week or so after an arson attempt had caught a significant portion of the building on fire, damaging a door and some stained glass windows. Thankfully the fire had been put out quickly by firefighters, and there hadn’t been any extensive damage to much of the rest of the things inside, but I distinctly remember the smell of the smoke that hung in the air. That was only about a month before the Notre Dame fire, but it has stuck in my memory almost as much.

While technically this cathedral isn’t really in use anymore, it is no less impressive than when it was. As I’ve talked about before, les Invalides is basically a massive military complex that includes a military museum, as well as some rehabilitation facilities, and a veterans chapel. The main exhibit, though, is the Dôme des Invalides.

The dome is a beauty in itself, and I have the great fortune of walking by it nearly every day I go to class. It’s massive and golden, with a big ol’ golden steeple sticking out the top of it, truly a display of Napoleonic French wealth and show. And that is only fitting, considering that it houses what is considered the final resting place for Napoleon himself.

The tomb of Napoleon sits in the middle of a sunken in hole in the middle of the room, which immediately brings it to your attention. The massive sarcophagus is surrounded on all sides in the lower level by twelve bas-relief portraits of different moments of Napoleon’s reign, and the floor is covered in mosaics that detail the battles he led.

On the far side of the main room is a statue of the crucified Christ. It makes a sort of altar, with some of the most beautiful pillars I’ve ever seen made from black and white marble. On the ceiling above the altar is a really nice painting of what I only assume to be a depiction of ascension to heaven, and behind it is a glass window that looks into the still-active veterans chapel-cathedral.

The dome has been something other than a cathedral for nearly two centuries now, but it’s an amazing place to go see regardless, and it deserves a spot on this list.

Okay, even without the recent fire, this one seems kind of obvious, but it’s for good reason! The Notre-Dame is a great place to visit if for no other reason than that it just feels important. It isn’t at all difficult to get lost in the joy of seeing different cathedrals, and going on too many cathedral visits in one trip can easily wash out any importance that a single cathedral can give you. But the Notre-Dame is different.

I’ve only been in the Notre-Dame once and it was only about a month before the fire happened. It was the first cathedral I had ever been into, and the sheer amount of amazing art and history in the place is almost overwhelming.

What’s also clear is that despite its distinctiveness, the Notre-Dame has also essentially served as a template for almost every major cathedral built since then in France. Even if you go out of Paris, local cathedrals tend to very clearly mimic in many ways the makeup of the Notre-Dame, even though they almost all add their own features that make them unique as well.

It’s obviously under construction right now, but that too is a good reason to go see it when it does reopen. We lived through a major historical event, in a building that has been riddled with important history for more than eight centuries. The ability to see something like that happen comes once in a lifetime, at best, and it makes it ten times more compelling to go and see it when everything is repaired in the end.

The cathedrals of France are world-renowned for being some of the best, and they really do prove themselves when you go to see them. They provide insight into not just the moment of history they were built in, but into the things they’ve endured in their long lifespans. It’s nearly impossible to find oneself in a cathedral without thinking about just how much the building itself has seen, which brings a whole new meaning to “if these walls could talk.”

If you get the chance to see a cathedral or two in Paris, make sure you hit one of these, and you won’t be disappointed.

If you enjoyed this post, please consider joining the mailing list for The Road and the Tree. It helps keep me motivated to keep writing, and you’ll get alerts whenever I finish a new piece.

One thought on “5 Cathedrals You Need to See in Paris”